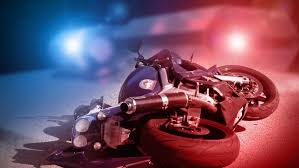 A 53-year-old Sallisaw man was taken by Med Flight to a Tulsa hospital after a head on collision with an automobile Wednesday night.

The accident occurred on County Rd. East 1050 .5 miles west of US 59 approximately .5 miles north of Sallisaw.

According to the Oklahoma Highway Patrol (OHP) report, Douglas Shockey was driving a 2006 Suzuki motorcycle westbound on CR East 1050 when Samantha Evans, 28, of Sallisaw exited a private drive turning left into the path of Shockey's motorcycle making contact head on.

Evans was driving a 2004 Chevrolet Aveo.

Shockey was flown to St. Francis Hospital in Tulsa and admitted in stable condition with head and trunk injuries. According to reports from family, Shockey was later released with no broken bones or internal injuries.

Evans, along with three other passengers in her car, including a 2-year-old female, were not injured in the accident.

The OHP report states that Shockey was not wearing a helmet at the time of the accident. Seatbelts were in use by all occupants of Evans vehicle.

The OHP was assisted at the scene by Sallisaw Fire and Pafford EMS.