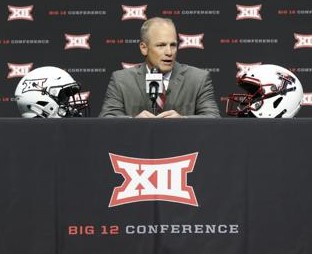 Sallisaw native and Texas Tech head football coach Matt Wells talks about his love for growing up as a Black Diamond while speaking at the Big 12 media days earlier this week.

Wells said, “It’s nice to be closer to home for my mom to come see us play a little bit.”

Wells noted, “A bunch of friends and high school coaches have already made the trek down.”

Wells was a football star for the Black Diamonds in the early 90’s. Wells’ coaching career has taken him to colleges including Tulsa and Utah State where he spent his last eight years until agreeing to take the Red Raiders’ head coaching job in December.

Wells told the crowd of reporters that, “Just growing up there (Sallisaw)…is part of the culture of that town. My parents raised us that way.” He went on to say, “I wouldn’t trade it for anything.”

“I am a product of a lot of those high school coaches at Sallisaw — not only in football, but baseball and basketball — that kind of molded into who I am today,” said Wells.

Coach Wells will have his hands full of improvements needed for the Raiders. The Red Raiders have not had a winning season for the last four years and have not won a bowl game since 2013. He said that he felt like he was not going to need to rebuild the program but just reload. When asked about his first season in Lubbock, Wells said he has focused on changing the culture.

“We always talk about it, what and how we do it.” Wells’ work ethic on and off the field is well known. A reporter in Utah called him the hardest working college coach in the nation. He lead Utah State to some big winning seasons as head coach including two with ten wins each.

Wells said of Sallisaw, “I don’t get back there near enough.”

He is the son of Suzy and the late Jim Wells. Luke, Wells' brother, is also a coach at Texas Tech. He is an assistant coach for tight ends and inside receivers.

His family has always been big supporters of the Black Diamonds. If fact Jim was the field announcer at Perry F Lattimore stadium for many years.