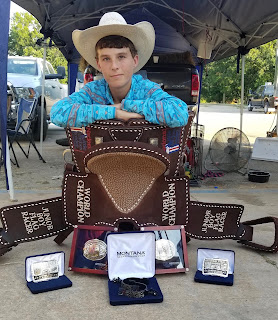 Tybo Watson, 14, of Muldrow was named the world champion flag-racer at the National Little Britches Rodeo finals at the Lazy E in Guthrie.

More than 1,200 youths competed in the finals. Tybo won four buckles, a set of spurs and a saddle, as well as a $1,000 scholarship and a pair of boots.

Tybo’s mother, Jo Watson, said that he competes in Little Britches events from August-June and the points he earned throughout the year landed him at first place in the world.

The 9th-grader will move up to the senior division next year.

Tybo will appear on the RFDTV network in the fall when the National Little Britches Rodeo Association begins airing episodes from the final round.