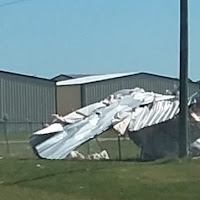 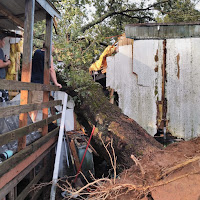 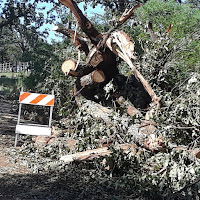 Sequoyah County is picking up the pieces after a severe storm Saturday evening left the area heavily damaged.

Steve Rutherford, Sequoyah County’s emergency management director, said the damage was caused by straight-line winds and not a tornado.

“We were very fortunate there were no injuries reported,” Rutherford said, noting that he clocked the wind at 65 mph during the storm.

Several roofs, trees and electric poles were brought down around the area, mostly from the state line to Roland, he said.

The storm hit Sallisaw on Saturday night, just after the city’s rescheduled fireworks show. The show went off without a hitch, but spectators and organizers had to scramble to leave the area before the weather hit.

After the storm, it was discovered that the roof blew off a hangar at the Sallisaw airport, and the sign was blown down at the city’s Sonic restaurant. A semi-trailer was blown over at the Roland casino during the storm as well, Rutherford said.

, Rutherford said, and crews continue working to restore electricity around the area. Rutherford said electric crews expect to have everyone’s power up and running by Tuesday afternoon.