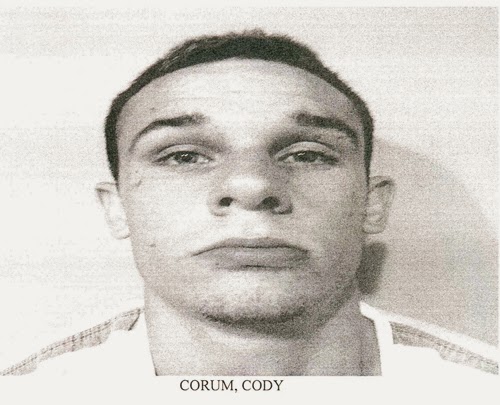 Cody Grodon Corum, 21, of Sallisaw was charged last week in Sequoyah County District Court, Sallisaw, with knowingly concealing stolen property. Corum entered a not guilty plea at his arraignment June 25. According to the Sallisaw police report, Corum and a female friend were asked by next door neighbors, on Redwood Street, if they had seen any of their property that had been stolen the night before. According to the report Corum said he saw a box of items sitting outside the house, so he brought the box into his own home. Upon further investigation by the police, who were given permission to search Corum's home, they found a television covered up by clothes, and blankets, clothes, a hair dryer, shoes and other items reported stolen from the same neighbors. Corum's female friend told police that Corum broke into the house the first time on June 16 then broke into the same house again on June 17. The stolen items were retrieved and returned to the owners. Corum's application for a court-appointed attorney was denied, according to court records. His next court date will be Aug. 6 when his case will be on Judge Larry Langley's disposition docket. Stay tuned to KXMX or visit www.kxmx.com for the latest news. By Sally Maxwell, Senior News Director