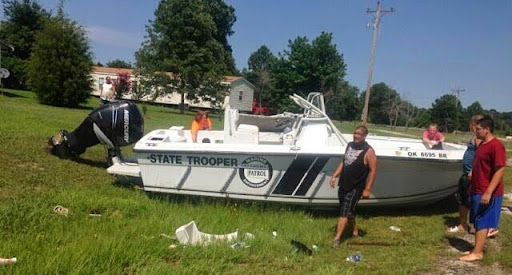 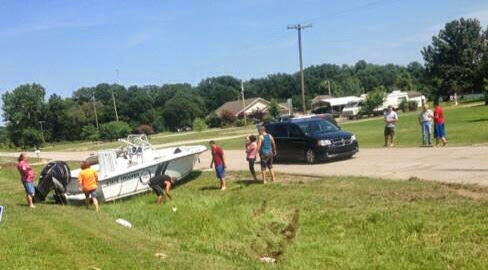 The Oklahoma Highway Patrol has confirmed the arrest of OHP Officer Joshua Davies. At approximately 4:30 pm on Thursday, July 3, Davies was involved in an accident while driving an OHP Sport Utility Vehicle towing an OHP boat as seen in the picture. Davies was on duty at the time of the accident. The accident occurred approximately one mile west of US Hwy 59 south, on Applegate Cove Road, south of Sallisaw.

According to the official OHP report, Davies "showed signs of intoxication" and was arrested immediately on suspicion of DUI by another OHP trooper who had arrived on the scene. The breathalyzer test that was administered registered over the legal limit, according to the report.

Davies had been an OHP trooper for eight years and has been placed on administrative leave pending results of the internal investigation. OHP Chief of Patrol Colonel Ricky Adams stated, "It is an emotionally draining situation when an officer finds himself in a position that he must arrest one of his own. Our troopers displayed professionalism in administering their duties during this unfortunate event. This individual was immediately arrested by state troopers on the scene and charged with DUI in compliance with state statute. This type of behavior will not be tolerated under any  circumstance."