Officer Matt Ellis goes "Above and Beyond" 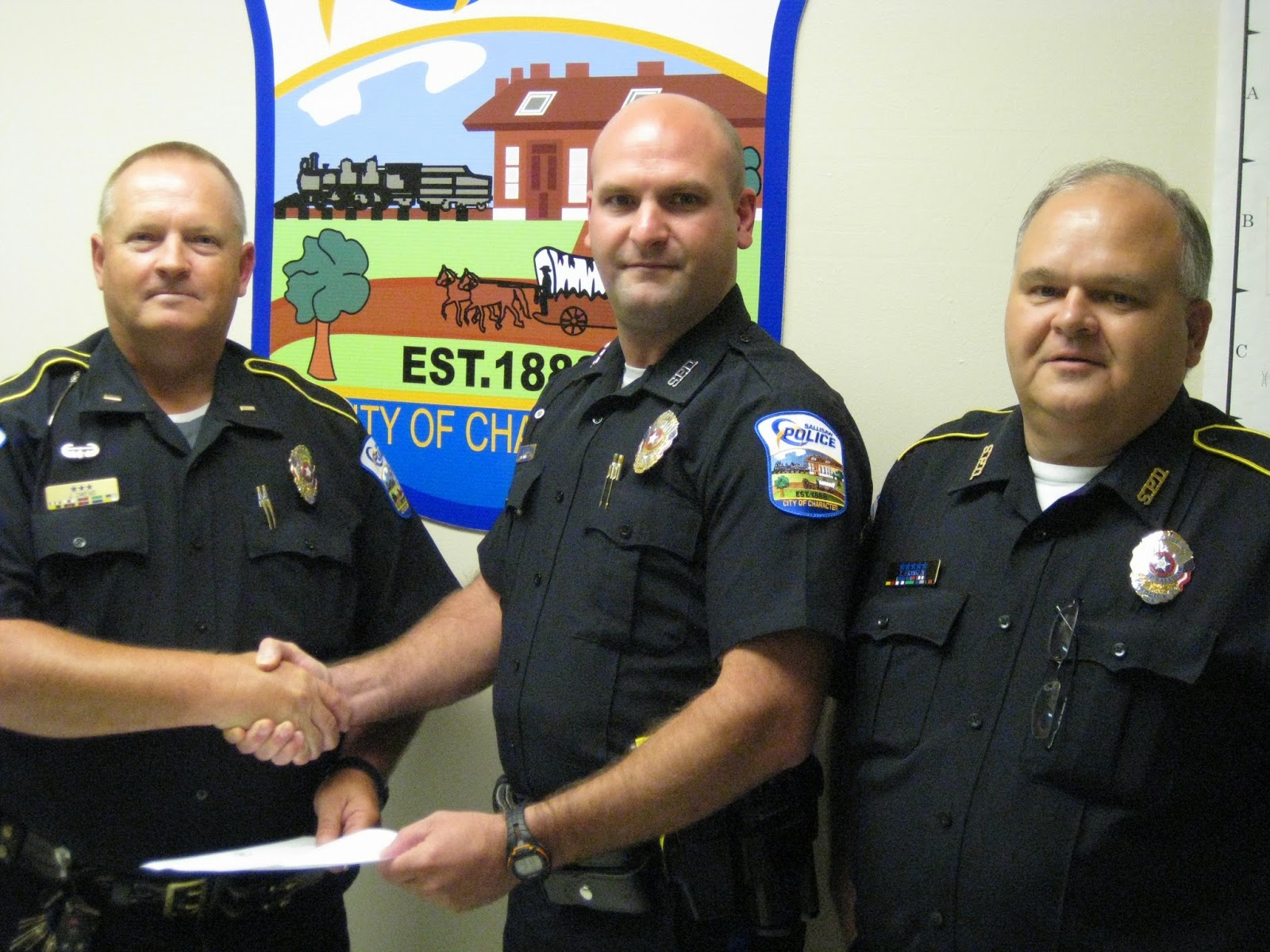 His boss said the officer went "above and beyond" but the officer said he didn't do anything that any Sallisaw police officer wouldn't do. Patrolman Matt Ellis helped save the life of a young girl who was attempting suicide. She was not successful due to Ellis' efforts. Because he worked so hard to get help for the young girl, who was in Texas, Ellis (above, middle) received a letter of commendation from his superior, Lt. John Owens (above, left) with the blessing of Sallisaw Police Chief Terry Franklin (above, right). Nevertheless, Ellis remains modest. "I don't believe it was above and beyond the call of duty," Ellis said. "Most officers would have done the same thing."

Ellis explained the young girl's suicide threat was brought to his attention by a family, with a 13-year-old daughter, who had just moved to Sallisaw from Texas. The daughter had been texting with a Texas school mate. That school mate, also 13, was threatening suicide for an  unknown reason. The dad and daughter didn't know what to do, so they came to the Sallisaw Police Department, where they found Ellis.  "The young lady came in with concerns about this friend in Texas. She showed me the phone app messages. The girl had taken some pills," Ellis recalled. Ellis got what information he could and called the police department in that Texas community. They were not helpful but that didn't stop Ellis. He continued his investigation and with the help of Facebook was able to find the suicidal girl's name, date of birth, and where her mother was employed. Ellis called that Texas police department again. This time they took him seriously. Ellis said, "Two hours later they called back. They were able to contact the girl at home. She had taken some pills and they took her to the hospital." Ellis continues to be modest. "Basically, all I did was what we'd do if contacted by another law enforcement agency. We do welfare checks all the time. We've done that countless times, especially if it's about a child expressing suicidal thoughts," Ellis said about the Sallisaw PD.

Ellis has been with the Sallisaw PD for three and a half years. He intends to stay and take continuing education courses through the Council on Law Enforcement Education and Training, also know as CLEET. His superiors hope he stays on too. Police Chief Terry Franklin said, "I felt like he needed a letter of commendation. I'm fortunate to have officers like him who are concerned about people's welfare. I'm proud Matt took the initiative and I'm proud Lt. Owens took the initiative for a letter of commendation." Owens said the same, simply. Owens said, "He did a good job. I'm proud of him."
By Sally Maxwell, Senior News Director