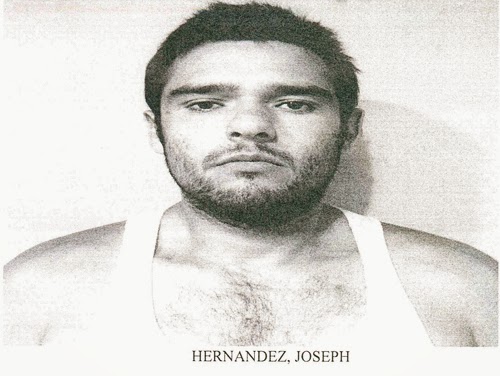 A Marble City man was charged in Sequoyah County District Court, Sallisaw, with assault and battery with a dangerous weapon, but he told investigators he didn't know why he attacked another man with a knife. Joseph Allen Hernandez, 26, entered a not guilty plea to the charge June 25 in district court, and his case was placed on Judge Larry Langley's disposition docket on Aug. 6. Investigators reported that Hernandez told them that on May 7 he went to a creek and "began drinking." He had drunk a pint of whiskey when other people began to arrive. Hernandez said that "for some reason he went to his car and retrieved his knife (with a 4-inch blade) that was designed for fighting." Hernandez told police "he did not know why he had gotten his knife out of his car, that there had to be a reason. Hernandez then states that all he could remember was that there was a white guy (the victim) yelling at him and was close to Hernandez's face. Hernandez admitted to stabbing the guy, but did not remember why. Hernandez stated that he had to have a reason to stab (the victim), that he would not have stabbed him for no reason, but he could not remember the reason for stabbing (the victim)." The victim, a resident of Muldrow, told investigators he was treated at Sparks Regional Medical Center in Fort Smith, and that he had a knife wound two to three inches long on the left side of his chest that took seven staples to close. The victim said that he and friends were swimming at a creek in northeastern Sequoyah County, and that he thought they were still in Arkansas. That's why he initially reported the stabbing to Crawford County authorities. The victim told investigators that he saw Hernandez get in a fight with another man, and he tried to break it up.The victim said he did not know Hernandez and that Hernandnez came up to him and without reason slashed him in the chest. Hernandez was released June 25 from the county jail on a $10,000 bond. Stay tuned to KXMX for visit www.kxmx.com for the latest news. By Sally Maxwell, Senior News Director