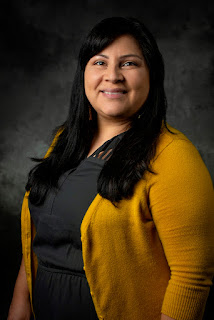 The Cherokee National Treasure distinction is an honor given by the tribe to individuals who are keeping the art, language and culture alive through their crafts and work.

Candessa Tehee, of Sallisaw; Choogie Kingfisher, of Tahlequah; and Lula Elk, of Stilwell, were selected as this year’s recipients.

“The Cherokee language, culture and heritage is an invaluable part of our identity as Cherokee people. Those who dedicate themselves to the preservation and promotion of those portions of our identity deserve to be honored and revered as Cherokee National Treasures,” Cherokee Nation Principal Chief Chuck Hoskin Jr. said. “We are proud to honor the lifelong efforts of these recipients to promote and protect - as well as educate the public about - our Cherokee traditions, language and culture.”

Tehee received the distinction for her craftsmanship in the traditional art form of finger weaving in oblique and warpface styles. Made only by hand, these art forms use different colors and interlocks in the yarn to create designs, and occasionally incorporate beadwork. She has received many awards for her artwork from competitions such as the Cherokee Heritage Center Trail of Tears Art Show. She has a Ph.D. in Linguistic Anthropology and is currently an Assistant Professor of American Indian Studies and Coordinator of Cherokee Language Education and Cherokee Cultural Studies programs at Northeastern State University.

Kingfisher was nominated for his work as a Cherokee cultural educator and storyteller. A well-known actor with several documentaries and voice

Kingfisher was nominated for his work as a Cherokee cultural educator and storyteller. A well-known actor with several documentaries and voice over work to date, he has travelled extensively for the past 35 years presenting his Cherokee culture, history and stories to the public and Cherokee Nation. Kingfisher also serves as a master of traditional ceremonies such as powwows, gospel singing and other tribal events. He was the youngest recipient for the Cherokee Honors Award in 2005 and awarded Tahlequah’s Best Male Actor in 2003.

Elk was nominated for being a traditional Cherokee shell shaker. She has been immersed in tradition her entire life, first shaking shells at stompgrounds at the age of five. Her grandfather was the chief of the stompground in her community, and she learned the art of making traditional turtle shell shakers from her mother and aunt. As a fluent Cherokee speaker, she taught at the Cherokee Immersion School as a communication language instructor, and passed down the art of shell shaking to girls at the spring and summer camps of the Cherokee Heritage Center. In 2001, she started work at the Cultural Resource Center, and is still employed with the Cherokee Nation.