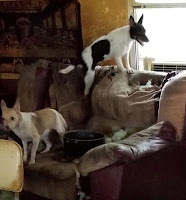 Two of the dogs that were rescued after
being abandoned in a hot trailer. Conditions inside the trailer where
the dogs were found. 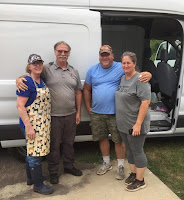 A concerned neighbor contacted the Sequoyah County Sheriff’s Department about the animals, which were living in a filthy, abandoned trailer home.

On Aug. 8 and with a judge’s forfeiture order in hand, deputies and the animal control officer entered the home and discovered nine rat terriers.

The animals apparently had been fed and watered regularly and weren’t underweight, said Ro Freeman, who operates Guardian Angels Animal Care. The neighbor reported having seen someone entering and leaving the home regularly.

“The dogs are all doing fine,” Ro Freeman said, “but they were hot and scared to death.” The temperature in the trailer was about 110 degrees, she said, adding that conditions inside the home were the worst she has ever seen.

“It’s a good thing people were willing to step up and do what’s right,” Freeman said, pointing out that the concerned neighbor’s call to deputies is what saved the dogs.

Guardian Angels Animal Care ensures rescued animals are cleaned up and provided with veterinarian care if necessary. The agency’s funding helps with paying the veterinarian care bills so the city doesn’t have to pay all of it, she said.

Freeman said her agency networks with such groups as the Forever Friends Humane Society and the Oklahoma Animal Alliance, which were able to find foster homes in the Tulsa area for all nine dogs. “It is so important to be able to network with other shelters around the state,” she added.

“All my life I’ve wanted to be a volunteer,” she said. When she moved to Sallisaw in 2007, she saw that she was “most needed here” helping animals.

There were two other dogs at the home that officials were unable to catch, she said.

The Sheriff’s Department is still looking for the owner of the trailer, who apparently left the dogs to die in the home.

To donate to Freeman’s agency, send checks or money orders to Guardian Angels Animal Care, c/o Ro Freeman, at 1911 Aspen in Sallisaw. You can also donate via PayPal at ropoindexter.wixsite.com/guardian-angels.