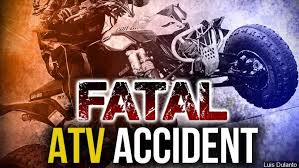 An ATV accident near Muldrow on Friday night sent a Muldrow teen to the hospital and left an Arkansas man dead.

According to the Oklahoma Highway Patrol (OHP) report, Ryan Galvan, 30, of Little Rock, was driving a 2016 Polaris Razr westbound on CR E1070 .5 miles west of S4710 Rd and 3.5 miles north of Muldrow when he over corrected to the left causing the ATV to roll 2.25 times. Galvan was ejected and the ATV came to rest on the passenger side in the eastbound lane.

Galvan was transported by Pafford EMS to Baptist Health in Ft. Smth with head injuries and passed away at the hospital.

A 17-year-old female passenger from Muldrow was also injured in the accident and transported to Baptist Health with head injuries.

According to the OHP report, the driver was not wearing his seat belt and the trooper documented he had on odor of  alcohol. The passenger was wearing a seatbelt the report stated.

The cause of the collision is listed as unsafe speed for type of roadway.

The OHP was assisted at the scene by the Sequoyah County Sheriff's Dept. Pafford EMS, and Maple Fire Dept.