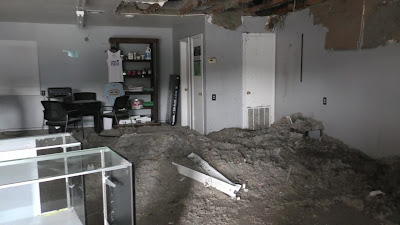 Damage inside the lobby of Top Shelf Medicinals.

The fire reportedly started in the attic above Sissy’s, then rapidly spread to the other stores.

The cause of the fire is still undetermined, Sallisaw Fire Chief Anthony Armstrong said Tuesday, but an air-conditioning unit is thought to be the culprit. No foul play is suspected, Armstrong said, and no one was injured in the blaze.

David Hanna, a tenant at the site, said all the stores at the mall sustained fire damage, as well as smoke and water damage.

“This is pretty bad,” Hanna said, but store personnel are already working to clean up the damage. Trailers and U-Haul trucks were on hand Tuesday morning as mall employees and business owners began to clear out the debris left behind.

Melissa Johnson, who owns Top Shelf Medicinals, a medical marijuana dispensary, said the damage at her store was “bad, but not as bad as it could have been.” She said she and her employees were able to get all of the store’s product inside a large safe before the fire forced them out of the building. Johnson also said she is planning to bring in a portable building so the dispensary won’t have to close.