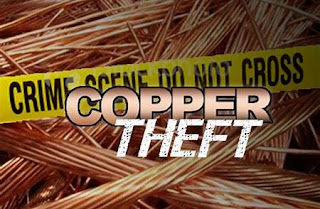 A Moffett man was arrested Aug. 5 in Roland after a witness saw him come out from under a house holding copper in his hands.

Records show that Daniel Alan Dye, 44, was seen in late July carrying copper he had allegedly stolen from under the home. He reportedly placed the copper in the truck he and his girlfriend were in, then left the scene.

When Roland police interviewed Dye, he told officers that he did go under the house, but denied cutting any copper, insisting instead that he only took copper that had been cut previously.

Dye told officers he sold the copper July 17 for $68.40 to Davis Iron and Metal.

Dye was charged with entering with intent to steal copper, a felony punishable by imprisonment in the penitentiary for 1-5 years, or the county jail for 90-200 days, and a fine of $100-500.