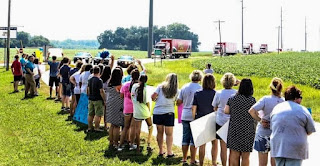 Excited members of the Moffett community and school watch and cheer
as God's Pit Crew rolls into sight. 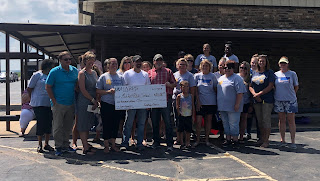 Cheers and tears of joy greeted God’s Pit Crew as they rolled into Moffett on Sunday to help the school recover from flooding that destroyed the town in May.

Teachers and staff members waited by the road to welcome their back-to-school saviors with signs thanking the visitors, who drove for two days and nearly 1,000 miles from Danville, Va., to help.

God’s Pit Crew (GPC) brought building materials, desks and podiums for every teacher, along with whiteboards and cafeteria supplies, a mobile kitchen for meals, construction tools and more. They also brought about 50 volunteers.

The team worked for two weeks gathering supplies and raising money before heading to Oklahoma. GPC’s youngest member, 11-year-old Silas, had a lemonade stand called “Juicing for Jesus,” which raised a whopping $10,000 for Moffett.

When asked what the team of workers means to Moffett School, teacher Stacey Beam said, “This is huge. That someone over 1,000 miles away would be willing to come here and help us is amazing. It truly is a miracle. God is so good!” Beam teaches reading and English for Moffett’s fifth through eighth grades.

Flooding devastated the town of Moffett and left the school, which has about 380 students, in shambles. Officials said 7 feet of floodwater filled the school and they had to completely gut every classroom.

“When we got word about the expected flooding, we thought it would be like the floods of 2015, but it kept getting worse,” Reynolds said. “The staff came in and started moving up as much as they could until they were ordered to evacuate.”

The flood’s impact on the school and the entire town was “devastating,” Reynolds added. “We had lost everything. We weren’t anticipating this much flooding.”

Reynolds said, “it’s really a miracle that GPC brought hundreds of thousands of dollars’ worth of equipment and supplies” including new, more energy-efficient LED lights that will replace the school’s fluorescent ones.

Reynolds said the school had flood insurance on four of the buildings, the gymnasium, cafeteria, the office and three classrooms, but it only covered the cleanup of the site, not the rebuilding.

Their biggest and most sentimental task, Reynolds said, is repairing the “Rock Building,” which was built in 1939 by the Works Progress Administration. The building houses the school’s fifth- through eighth-graders, as well as the after-school Boys and Girls Club.

GPC is “a lifesaver,” Reynolds added. “I don’t know what we would have done” without them.

Dean Payton, one of the pastors at New Life Church, served as the go-between for GPC and the school. When he contacted GPC, several team members came and toured the site. Payton said they called that same night saying the entire team would come to Moffett. Payton also worked in Moffett as part of “8 Days of Hope.”

Beam said GPC told Moffett School staffers to make a list of their needs. Even though the list got longer and longer, she said, they were surprised when GPC said they would bring everything they requested.

This is GPC’s largest disaster-recovery mission to date. Randy Johnson, the founder and president of the group, said that in its 20-year existence, GPC has helped 113 communities affected by natural disasters and crews have traveled to 27 states and 13 foreign countries.

Beam said the team still needs donations. To donate money, go to GodsPitCrew.org/donate. Put “Moffett School” in the notes section. To donate your time, come to the school’s east parking lot, by the gym and softball field. There will be a tented sign-up area for volunteers, where they will sign a release form and receive a badge, she added.

The team typically spends about a week in disaster zones, Johnson said, but they will spend three weeks working in Moffett. The group will spend nights at Eastside Baptist Church, 2710 Massard Road, in Fort Smith, he said.

In addition to GPC’s contributions, Harps Food Stores gave teachers a $10,000 check earmarked for the school’s athletic department. Qual-Serv, a Fort Smith factory, donated more than $100,000 worth of equipment to the school.

When asked why he does this work, Johnson said simply, “Because it’s the right thing to do. We are blessed to do God’s will and letting Him use us.”