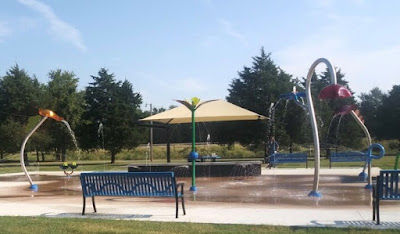 The wait is over for a place to play in the water in Sallisaw.

The site will be open from now until the weather starts cooling off, said Sallisaw City Manager Keith Skelton, “probably in two to three weeks.”

As guests arrived at the park, the most notable sound was the water running at the site. After nearly two years of planning, all the splash pad needs now is children to come and play.

The facility is “99% completed,” Skelton said Tuesday. City crews still have some projects to complete, such as working on the park’s existing picnic area, he said.

The water supply is on a timer so the park will remain open daily until almost dark, he said Tuesday.

The project was built by Creative Designs, a division of Burton Pools & Spas in Fort Smith.

The freshwater splash pad is designed so the water is not recycled; instead it drains into the city’s waste treatment plant, city commissioner Julian Mendiola said at the grand opening.

The project was made possible by a grant the city received, Mendiola said. The city had to pay part of the construction costs, but the grant paid for most of the work.

Marty Green, chief executive officer of the Sallisaw Chamber of Commerce, said the splash pad is “another great feature for not only city residents, but people from around the area.”

“They (visitors) can come to Sallisaw and eat and just spend time at the park. This is a nice thing for people to bring their kids to,” he added.

When asked what the splash pad brings to the city, Mayor Ernie Martens said Tuesday, "This is a great big deal for Sallisaw.” The mayor said he didn’t think he would venture onto the splash pad, but said his grandchildren will definitely come to play.