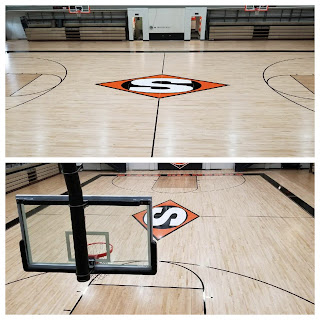 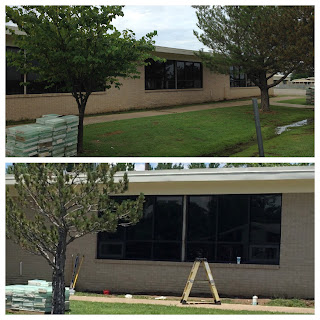 Farmer said that money used on these projects was designated for facility maintenance, and does not take funds from other projects or teachers’ salaries.

The new windows at Liberty School were installed by Gipson Construction of Sallisaw. The company was the low bidder on the project, Farmer said.

Farmer said gym floors are refinished about every 10 years, but Sallisaw’s high school gym floor had to wait 14 years because of the lack of funding. The floor also had some water damage on the north side, caused by blowing winds.

He said, “The coaches, James Youngblood and Robert Brunk, really helped. They were instrumental in coming up with the artwork.”

The school system also spent about $5,000 on roofing at Eastside School, and added 37 parking spaces on the Liberty-Eastside Campus, Farmer said.

“We had some old basketball courts that weren’t being used,” Farmer said, “and parking was a problem there.”

At the high school, which is now 30 years old, vinyl tiles were installed and about 50 percent of the lighting was converted to LED, Farmer said. The interior at the high school was also painted for the next school year.

Farmer said school funding continues to be a problem, but he doesn’t anticipate losing any programs.

“Funding continues to decline, substantially since 1989,” Farmer said, “but we will be able to maintain right now. Hopefully the Legislature will find some money for the staff we’ve lost and our programs. It’s time for a change.”