Gore Cleaning Up after Storms

The Gore School football players and coaches helped the school and
town clean up after storms did massive damage a few weeks ago. 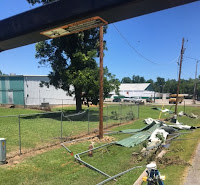 A portion of a Gore School roof lies along the highway following storms about two weeks ago.
School Superintendent Lucky McCrary said repairs are underway and the damage will not
delay fall classes which begin Aug. 24.

Roofs, structures, trees, etc., went flying during recent storms at Gore. Now the residents, the town, and the school are cleaning up.

A clean-up day is set for Saturday, when residents can dispose of the broken parts of their lives and homes at the sports complex in Gore.

Gore officials ask that the following not be brought to and disposed of at the complex: hazardous materials, construction debris, tires, liquids, paint, and appliances with Freon such as refrigerators, freezers and air conditioners.

Gore Schools are also having to make storm damage repairs before school starts on Aug. 24.

Superintendent Lucky McCrary said the storms caused about $25,000 in damage, but none of that damage will delay the start of school. McCrary reported storms blew off a part of the roof at the Gore Lower Elementary Building. That roof is being repaired today (July 12).

Also damaged were a dugout, which “was flattened,” McCrary said, a carport roof and the roof on the hitting barn.

But Gore won’t stay wrecked long. McCrary said the football players and coaches are helping clean up the town and school.