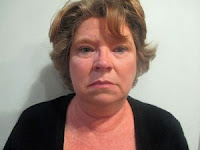 A 53-year-old Muldrow woman, a former teacher at Muldrow High School, will go to trial Aug. 7 for enabling child abuse by injury, according to Sequoyah County District Court records.

The accusation against Boshers was investigated by the Muldrow School police and Muldrow Police Department. According to the report and charges filed Oct. 6, Boshers was on duty as a safety monitor at the school during the lunch break, when her son, identified as B.B. in court records, told his mother, Boshers, that he was going to beat up another student, identified in court records as G.B.

B.B. and Boshers, according to the Muldrow police officer’s report, then went to the gazebo where G.B. was standing and a fight began that lasted about two minutes.

The report continues, “During the fight BB picked GB up off the ground, slamming him to the concrete flooring on his head and neck area then punching him in the back of the skull and spinal area.”

The report alleges Julie Boshers did nothing to stop the fight, and can be seen in a video standing, with her arms at her side, observing but making no attempt verbally or physically to prevent or stop the fight. Witnesses said another student stepped in and stopped the fight.

Boshers entered a not guilty plea to the charge on Jan. 12. District Judge Jeff Payton set the trial date at a hearing last week in district court.