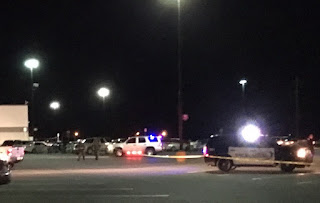 According to eye witness reports shots were fired in the parking lot of the Sallisaw Walmart at approximately 6:00 pm this evening (Sunday) during what is believed to have been a drug related incident.

On Sunday evening Sallisaw Police Officers were involved in a drug investigation that led them to the Walmart parking lot. Witnesses initially reported that suspects fired upon the officers who returned fire but that information has now been confirmed to be inaccurate. The suspects struck one officer with a vehicle at which time officers fired upon the suspect's vehicle, according to Sallisaw Police Chief Terry Franklin. The officer was taken to Sequoyah Memorial Hospital to be treated for non-life threatening injuries.

The incident allegedly began in the Walmart parking lot and quickly escalated with suspects fleeing to the parking lot of the Sallisaw Family Medical Clinic where the suspects were placed under arrest.

We will bring you more details as they become available later tonight and tomorrow on MixTv Channel 19 News.

Sallisaw Police Chief Terry Franklin stated, "The Sallisaw Police Dept. and the Sequoyah County Sheriff's Dept. were conducting an undercover narcotics investigation in the Walmart parking lot. During the investigation one police officer was struck by the suspect's vehicle, at which officers fired at the suspect striking the vehicle."

According to Franklin the suspects led officers on a short vehicle pursuit which ended east of Walmart. Three subjects were taken into custody. "The subjects were not struck by any of the rounds fired," added Franklin.

The police officer that was struck by the suspect's vehicle was transported to an area hospital with non-life threatening injuries.