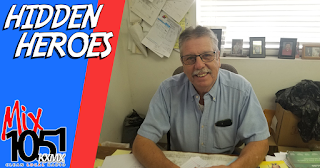 As the coronavirus continues to make global headlines, The Mix is taking a look closer to home and honoring the “Hidden Heroes” right here who are working tirelessly behind the scenes to keep life as close to normal as possible.

Forty-four years ago yesterday Dan Callahan started working for an area co-op as a propane truck driver. Flash forward to 2020 and Callahan, now manager of the Sallisaw Co-Op, is still offering up the same friendly service his customers have come to expect.

Dan Callahan, the third of our “Hidden Heroes,” has built a reputation of fairness and respect with everyone he comes into contact with, according to a letter nominating him.

Callahan, who has been co-op manager since 2002, said Thursday that his career officially began April 23, 1976, at Double Circle Co-Op. Before that, he spent several of his high school years working there as well.

“My philosophy,” Callahan said, “is that I am here to take care of my customers, because without them, I wouldn’t survive.”

“I’ve always had the best customers and the best employees,” Callahan said. “You’re only as good as your employees,” he insisted.

Callahan said he really appreciates how the company’s president allows him to run the co-op his way. “As long as I can take care of my customers and workers I am happy,” he added.

Callahan hasn’t been afraid to go to work despite the COVID-19 pandemic, his wife, Glenda Miller Callahan, said Thursday. She said that’s because Dan tells her the co-op is essential to the area’s agriculture industry and the farmers need their feed and other necessary items to run their farms.

“Sometimes I get aggravated when he gets calls late at night or on the weekends,” Glenda said, “and he always says to me, ‘What if that was us and we needed something?’ ”

It’s not just his wife who sings Callahan’s praises. Sarah Coleman, who has worked at the co-op since 2015, says he treats everyone equally. “Working here is not like any place I’ve worked before,” she said Thursday. “We’re like a big family and that’s because of him.”

Callahan always checks on his employees’ well-being, Coleman said, and he “never fails to ask us, ‘How are you today?’ ”

Coleman said Dan’s philosophy is “If you don’t like what you’re doing, you won’t be happy” and that shows in the way he treats his employees, which she says makes all the difference.

The Callahans have one daughter, Dandra Randolph, and a grandchild, 10-year-old Augustus, better known as “Auggie.” They are lifelong residents of Sequoyah County.

“He just has a heart of gold,” Glenda Callahan said.