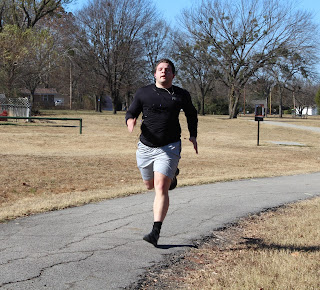 The officers testing on Tuesday were at Jay Reynolds Park in Sallisaw running one and a half miles, or about two and a half times around the park. Franklin said the officers started at 11 a.m. doing situps and pushups, then did the running part of the test.

Devin Harriman, above, was just one of several who were testing. Franklin said the tests are held twice a year, and those who could not test on Tuesday will test on Thursday.

Franklin explained the officers strive to meet at least one of two standards, both of which offer a pay incentive. Each offers a 2.5 percent incentive, and if the officer passes both standards he or she may qualify for a 5 percent pay increase. Franklin said he was happy to announce that “Everyone passed.”