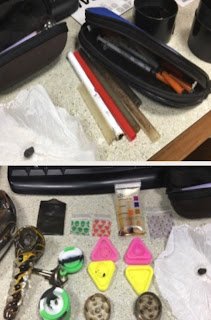 Some of the drugs and paraphernalia found during stop. 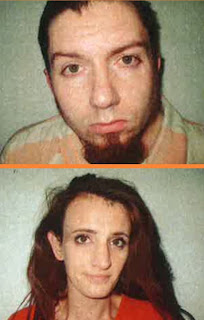 Lane reported Deputy Jason Stone, on Nov. 25, saw a vehicle make an illegal u-turn then drive over the center line on State Highway 82. Stone stopped the vehicle on Hwy. 82 six miles north of Vian. During the traffic stop, Stone noted extreme nervousness, inconsistent stories and erratic behavior by the two occupants of the vehicle. He was given consent to search the vehicle and found heroin, methamphetamine and marijuana, syringes, smoking pipes and digital scales along with other paraphernalia.

Lane said narcotics investigators have been getting information about heroin coming into and being used in Sequoyah County.

“Heroin is a drug that is even worse than methamphetamine. We are continuing to aggressively go after the drug dealers in our county, while the new 780 and 781 law that our state voted in, makes it harder for us, we will continue to relentlessly pursue the suppliers,” Lane said. “We’ve already got our hands full with the people that reside here in our county, we sure don’t need Tulsa dealers and users coming down here and adding to our problem.”