Cox and Burlison Set to Be Court Clerk and County Commissioner 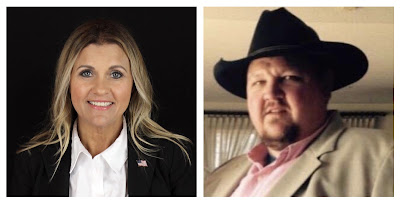 Throughout the county, 80 percent of Republican voters voted straight party tickets replacing all incumbent elected Democrat officials on the ballot. In comparison, only 20 percent of Democrats voted strictly along party lines.

Gina Cox, the current court clerk for the City of Roland, defeated incumbent Sequoyah County Court Clerk Vicki Beaty by a vote of 8,844 to 6,447.

Wednesday Gina Cox stated she was excited about her win. "I'm going to give it a couple of weeks, then I will start talking to all the employees and see where things stand. I hope everyone will stay and give me a chance."

In District 2, Beau Burlison, a football and wrestling coach at Vian Public Schools, defeated incumbent County Commissioner Steve Carter by a vote of 3,202 to 1,708.

Asked Wednesday what his post-election plans were, Burlison said that once he is done collecting his campaign signs around the county he wants to focus on making his district and Sequoyah County proud. “The promises I made during my campaign are what I’m going to do while I’m in office,” he said.

The majority of county voters were against two measures on the ballot, including State Question 814, which would have decreased Tobacco Settlement Endowment Trust Fund payments. There were 7,954 votes against the measure and 6,467 for it. State Question 805 would have prohibited using a person’s past non-violent felony convictions to impose a greater sentence when sentencing a person convicted of a non-violent crime. The vote was 9,802 against and 4,812 for the measure.

These totals represent Sequoyah County votes only. Totals are not official until they are certified by the Election Board.