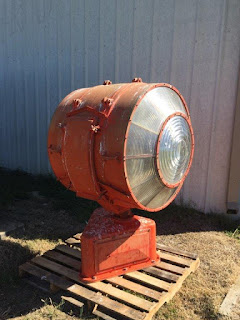 The old beacon at the Sallisaw Municipal Airport has been described as belonging “in a museum.”
It was replaced Wednesday after serving the airport since the late 1970s.

An antique at the Sallisaw Municipal Airport has been retired and replaced.

City officials on Wednesday replaced the airport beacon, believed to have been World War II surplus, with a more modern light for pilots’ navigation and safety.

The new beacon is used primarily for night operations at the airport as an identification and location marker, according to information from the company. With two 400-watt pulse-start lamps the dual-light beacon, which flashes green and white, features a patented design that makes it maintenance free except for lamp replacement.

Not much is remembered about the old beacon, city officials said, because it has been at the airport for so long.

Kevin Burch, airport operator, said, “City Manager Clayton Lucas said it should be in a museum!”

The old beacon was believed to have been installed in the 1970s, city officials believe, and its gears have worn out, requiring three repairs in the last year alone.

“The gear box was constantly breaking down,” Burch said. “The new beacon puts out the same wattage but the motor is belt driven and has fewer moving parts. You install it and forget about it.”

Airport beacons are supposed to run continually through the night and during bad weather, which was apparently hard for an old beacon with aged gears. City records indicate the old beacon was made between 1926 and 1933 by the Department of Commerce Airway Division. It was installed at the Sallisaw Municipal Airport after it was decommissioned by the government.

The new beacon is mounted on a 60-foot lattice metal tower and is expected to last for years into the future. Burch said such beacons are required at public airports.