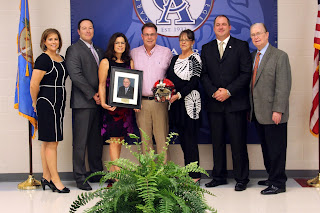 Jerry Hetherington was a faithful CASC Regent for 33 years prior to his death earlier this year, and CASC President Jay Falkner stated the college is honored to have Regent Hetherington’s family help carry on his legacy at CASC.

With the appointment approved, Falkner recognized Georgia, Jarret and Teri Hetherington and shared with them a photo of Regent Jerry Hetherington.

“This photo will be displayed at Carl Albert State College’s new Wall of Honor,” Falkner announced. “Regent Hetherington is the first to be recognized as a member of the College’s Wall of Honor, and in my mind there is no one more deserving to be the first honoree than Jerry.”

Falkner said, “Regent Hetherington was a shining star in his and my hometown of Panama. There is an entire trophy case at the Panama High School honoring Jerry. Kids grow up there admiring Jerry, and dreaming of achieving even half his success. Because of that admiration, this year’s Panama football team has a JH on their helmets. Today, we are honored to present a very special Panama Razorback helmet to the Hetherington family. This is signed by this year’s coaches and team members.”

President Falkner concluded, “We are so pleased the Hetherington family wants to continue the strong relationship between Carl Albert State College and their family that Jerry started over 33 years ago. On behalf of everyone at Carl Albert, we say thank you.”