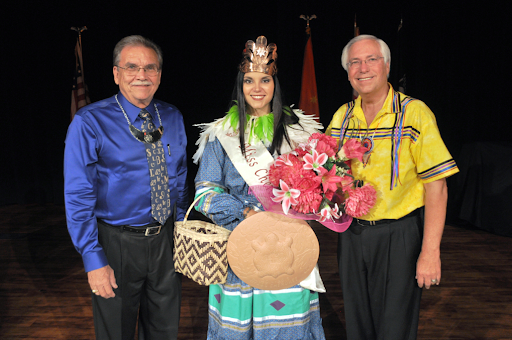 Sunday Plumb of Tahlequah was named the new Miss Cherokee Saturday at a leadership competition at Cornerstone Fellowship Church in Tahlequah. Plumb, 21, receives a $3,000 scholarship and will represent the Cherokee Nation as a goodwill ambassador for the next year. Above she is applauded by Cherokee Nation Deputy Chief S. Joe Crittenden, left, and Principal Chief Bill John Baker.

A senior at the University of Arkansas, Plumb is the daughter of Loyal and Susan Plumb of Tahlequah. Plumb said after being crowned, "It's such an awesome feeling to be able to represent the Cherokee Nation as Miss Cherokee." Plumb is studying Animal Science at the University of Arkansas. She is a member of the Native American Student Association and volunteers for Girls Scouts of America. She enjoys gathering traditional foods, shooting blow guns, weaving baskets and making Cherokee tear dresses. For her cultural presentation, Plumb performed a detailed explanation on the history and cultural significance of the tear dress. Her platform tackled the issue of low graduation and retention rates of Native Americans in college compared to other ethnicities. She wants to start a program that gives current Cherokee college students the ability to speak to high school juniors and seniors about what they can expect in a college environment, both socially and academically. Sally Maxwell, Senior News Director

﻿
For more news stories stay tuned to The MIX 105.1 or visit www.kxmx.com