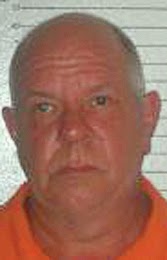 Craig Neal Hart, 57, of Vian, who was to go on trial for first-degree murder and other charges Monday in Sequoyah County District Court in Sallisaw, instead entered a blind plea before District Judge Jeff Payton Monday, and will be sentenced on Aug. 11 by Judge Payton. Hart, by entering a blind plea, does not plead guilty, but allows the judge to decide upon a punishment. Hart is accused, with three others, in the shooting death of Jack Purselley, 38, at his rural home near Akins, where he was found on July 25, 2011, in his recliner, shot five times. His wife, Raelynne Simonin, 25, pleaded no contest to charges on Sept. 11, 2013, and was sentenced to 45 years in prison. At the time she said she married Purselley because he told her he had a $1 million life insurance policy and she was the beneficiary. David Joseph Danylchuk, 55, of Sallisaw was sentenced to life for his part in the murder and conspiracy, and William Douglas Daniel, 54, of Sallisaw pleaded guilty to second-degree murder in exchange for a  20-year sentence and his testimony against the three other conspirators.