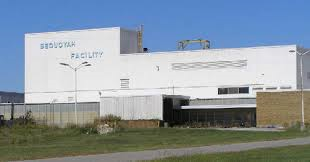 Sequoyah County Commissioners agreed to a settlement with Sequoyah Fuels over the company’s taxes at the commission meeting Monday. Steve Carter, District 2 commissioner, said he wasn’t happy with the settlement amount but was happy the disagreement was settled. Sequoyah Fuels is in Carter’s district and the Gore School District. Carter said the county would get about 50 percent of all that is owed, including interest – about $400,000 of the $800,000 in accumulated interest earned on an escrow account. The account balance is about $3.2 million. Carter said, “The only people who got cheated were the kids. We lost money that could have gone to education. The school can never make up for what they lost. I’m not too happy with it.”
The litigation over Sequoyah Fuels taxes covers 1995 to 2011, because the company said the land, buildings and equipment were contaminated and not worth the evaluation. The county disagreed, and while the two sides argued, Sequoyah Fuels deposited taxes in an escrow account with the county.
In 2008 the Nuclear Regulatory Commission, which oversees nuclear facilities, approved Sequoyah Fuels’ closing plan, which entombs contaminated materials on site. The company processed uranium for nuclear reactor fuel rods.

Carter said the money in the escrow account will be distributed by state rules on tax monies.
Posted by News Team at 10:18 AM