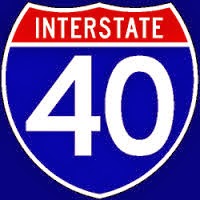 One hundred pounds of pot was seized by the Oklahoma Highway Patrol recently after they stopped a motor home on Interstate 40.  John Ferranti, 56 of Redwood Valley, California, faces a charge of trafficking in illegal drugs.  The charge was filed March 7 in Sequoyah County District Court.

According to the OHP report, Ferranti, driving a motor home, was stopped by an OHP trooper after the motor home went outside the fog line alongside the highway.  Ferranti gave the trooper permis- sion to search the vehicle.  The trooper then uncovered ninety-seven bundles of a green leafy sub- stance that appeared to be marijuana.

Ferranti will be arraigned on the charge March 19 in district court.

For more stories visit us at www.kxmx.com
Posted by News Team at 8:47 AM