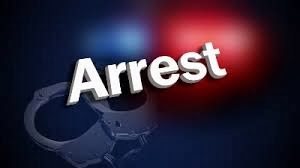 Authorities with the Sequoyah County Sheriff's office had to shoot out the tire on a vehicle to catch two persons accused of vehicle theft.

Charles were filed against the two, Brian Lee Walker, 40 of Porum and Casey Gann, 25 of Gore, last week in Sequoyah County District Court in Sallisaw.

According to the officers' report, an undercover sting was set up to capture those who allegedly stole two vehicles, a black Dodge Magnum and a Dodge pickup truck.  However, when officers attempted to stop the man and woman in the parking lot during the sting, the male driver began to back the Mag- num in the direction of the officers.  After ordering the driver to stop, one of the officers shot at a tire on the car.  The driver still continued backward until the officer shot the tire again.  The car ended up in a ditch in front of the diner.

The officers reported both suspects resisted arrest and had to be subdued.  Both ere booked in the county jail on February 17.

According to the report, the suspects did not include the pickup truck in the undercover buy.

For more stories visit us at www.kxmx.com
Posted by News Team at 9:55 AM