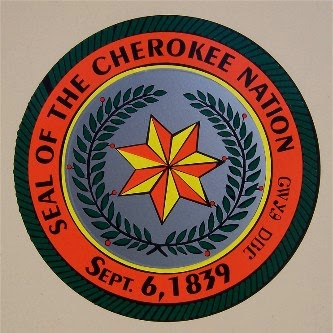 The Cherokee Nation honored several area veterans at the March Tribal meeting.  Those honored with the Cherokee Medal of Patriotism were Paul Thomas Caskey, Sr. 89 of Adair, Arthur Carter 79 of Gore and Deborah Ann Crossland 61 of Sedona, Arizona.

Caskey joined the U. S. Marine Corps in June 1943 and completed his basic training in San Diego.  After basic and advanced training, he deployed to the South Pacific.  He was stationed at the Solo- mon Islands, Mary Anna Islands and Volcanic Islands.  When World War II ended, Caskey returned to the United States and received an honorable discharge in December 1945.

Carter joined the U. S. Navy and completed his basic training in San Diego.  After basic training, Car- ter was sent to Litchfield Park Fire Station in Phoenix for fire training.  He was placed on the USS Hancock as a gunner's mate.  Carter served on the carrier while off the coast of Korea during the Kor- ean Conflict.  After 1955, Carter returned to the United States and served four additional years in the Naval Reserve.  He received an honorable discharge in 1960.

Crossland enlisted in the Women's Army Corps and completed basic training at Fort McClellan, Alabama.  Crossland was awarded honor trainee of her platoon and selected to serve in the elite Women's Army Corps.  After her honorable discharge in 1973, she immediately began serving in the 101st Army National Guard Band in Denver.  Crossland served more than twenty years before retiring in 2003.

For more stories visit us at www.kxmx.com
Posted by News Team at 11:09 AM