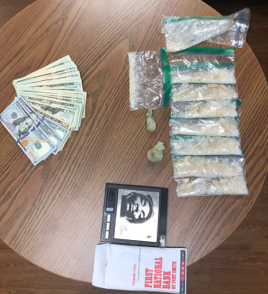 The United States Attorney’s Office for the Eastern District of Oklahoma announced today that seven defendants, primarily residents of Pittsburg, LeFlore, and Sequoyah Counties, have been indicted for their roles in a conspiracy to distribute and possess with the intent to distribute methamphetamine in the Eastern District of Oklahoma and elsewhere. Drug Conspiracy is punishable by not less than 10 years imprisonment, and up to a $10,000,000 fine or both. The defendants were indicted on June 9, 2020. A coordinated law enforcement operation to arrest the defendants charged in the indictment began on Tuesday, June 16, 2020. A copy of the full indictment can be found online at https://go.usa.gov/xwfmV.

Sheriff Lane said, "Our investigators have worked tirelessly for about eight months on this drug trafficking organization. As always, I am very proud of the work our team has done. Crime and drug trafficking doesn't stop at the county line. Fortunately we have two investigators assigned to Homeland Security and one assigned to the U.S. Marshals. This allows us to investigate and follow these large-scale drug traffickers into other areas of the state." Further arrests are expected as a result of this investigation.

This case is part of the Department of Justice’s Organized Crime and Drug Enforcement Task Force (OCDETF) program. The OCDETF program is the centerpiece of the Department of Justice’s drug supply reduction strategy. OCDETF was established to conduct comprehensive, multilevel attacks on major drug trafficking and money laundering organizations. Today, OCDETF combines the resources and expertise of its member federal agencies in cooperation with state and local law enforcement. The principal mission of the OCDETF program is to identify, disrupt, and dismantle the most serious drug trafficking and money laundering organizations and those primarily responsible for the nation’s illicit drug supply.

“For years Oklahoma has been plagued by the death and destruction that methamphetamine leaves in its wake. Drug cartels and dealers profit while addicts, their families, communities, and society respond to the tragic outcomes,” said United States Attorney Brian J. Kuester. “Over the last several months numerous federal, state, local, and tribal law enforcement agencies joined forces to strike back against a drug trafficking organization whose members are responsible for delivering large quantities of methamphetamine to rural Oklahoma and committing acts of violence to perpetuate their drug trafficking operations. The men and women of those agencies worked tirelessly alongside each other and with members of the United States Attorney’s Office to get to this phase of the investigation. I commend and thank all those agencies that participated.”

“The prosecution of members of this criminal organization is a victory for our communities not only because of the threat they pose to public safety but also the hateful ideology they believe in,” said Ryan L. Spradlin, Special Agent in Charge of HSI Dallas. “HSI will continue to aggressively use its ample authority, and pool its expertise and resources with our law enforcement partners to take ruthless drug traffickers and organized criminals off our streets.”

“If you choose to traffic methamphetamine in Oklahoma, you will be caught and held to justice,” stated Eduardo A. Chavez, Special Agent in Charge of the DEA Dallas Field Division. “Through our strong partnerships with area law enforcement and with the support of the Texoma High Intensity Drug Trafficking Area program, the tireless hours spent by our agents, officers, investigators and analysts has made the streets of our hometowns safer.”