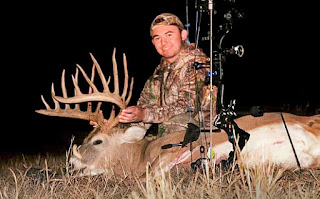 Guner Womack, 18, of Morrision, took this monster buck in Pawnee County with a bow earlier this year. Record trophy bucks could be in the cards for Oklahoma's 2019 deer gun hunting season, which opens Saturday, Nov. 23. (Via Facebook)

The most highly anticipated day of the year arrives Saturday for many thousands of Oklahoma hunters. The state’s deer gun season officially begins a half-hour before sunrise Nov. 23.

For many sportsmen and sportswomen, the 16-day season will be the best time to put meat in the freezer and maybe hang a trophy on the wall.

And some big-time trophies are certainly out there this year ­­— Guner Womack, 18, of Morrison, will vouch for that. Just a few weeks ago, Womack took his bow out for an archery hunt on family land in Pawnee County. That evening, the Oklahoma State University freshman got his first-ever archery harvest and most likely a No. 1 ranking in the official Oklahoma Cy Curtis big game record book.

Womack’s buck green-scored 192 6/8 net, which if stands will put his name atop the list for Oklahoma’s largest typical whitetail bucks taken with a bow.

Overall, the state’s deer population is in great shape this year, thanks to abundant (in some cases record-setting) spring rainfall and a fairly mild summer, said Big Game Biologist Dallas Barber with the Oklahoma Department of Wildlife Conservation.

“Along with habitat conditions, deer numbers look good over most of the state.” That means plenty of deer are moving about with the rut, or breeding season, underway.

“The rut has been going strong over the last two weeks across much of the state,” Barber said. “While most does have been bred by the time gun season starts, it will not be uncommon to still see bucks seeking does that have yet to be bred.”

Deer hunting plays a major role in the Wildlife Department’s deer herd management strategy. For the past several years, the Department has stressed the role deer hunters play with the slogan “Hunters in the Know … Let Young Bucks Grow!” Barber praised hunters for their voluntary participation, because every time a hunter decides to pull the trigger, he or she is making a management decision.

This year, he is hoping hunters will harvest more does than they did in 2018.

“It still remains as important as ever to place emphasis on doe harvest to keep a healthy, thriving population,” Barber said. Antlerless deer harvest becomes even more important in the state’s deer management plan when populations grow.

According to the 2018-19 Big Game Report published in the September/October issue of Outdoor Oklahoma magazine, hunters took 39,409 does, amounting to 36 percent of the 2018-19 harvest, well short of the 40-45 percent target range.