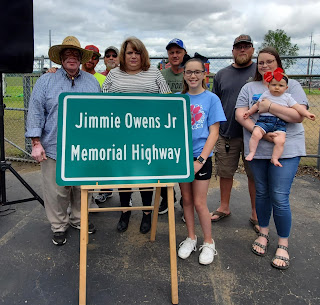 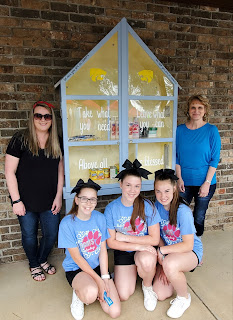 The community gathered on Saturday, May 4 to remember the late Jimmie Owens, teacher and superintendent who died Feb. 13, and dedicate a road there named in his honor. A new community blessing box was also dedicated.

In February, on the way to Owens’ funeral, Nataya Dunlap, a seventh-grader at Moffett Public Schools, had a question for her mom.

“What is the name of this highway?” Nataya asked her mother, Heather Barnes, a Moffett school staff member. Barnes informed her daughter the road on which they were traveling was old Highway 64. Nataya then asked her family “How do we get the name of the road changed to honor Mr. Owens?”

“Nataya took it upon herself to email state representatives and anyone else that would hear her story asking for the road to be renamed,” said Lindsie Dyer, People Inc.’s TSET Healthy Living program director. “A couple of weeks later she learned that her hard work and persistence had paid off.”

The dedication of the new road signs took place as part of the Block Party as Owens’ family, friends and staff joined the ceremony.

“We would like to thank everyone that had a part in making Nataya’s dream a reality and a special ‘thank you’ to Nataya for not giving up, even after her first attempt fell through and she was told it could not be done,” Dyer added.

“The blessing box was something that Mr. Owens really wanted to be a part of,” Dyer said. “He found the dollhouse that he wanted to use but unfortunately was unable to complete it before he passed.”

Several members of the community came together once they learned the story and began donating the supplies to finish the project.

Shannon Edwards, the SWAT team’s adult partner, took the lead on this project to make sure it was complete for Block Party dedication.

The blessing box is located at Moffett Public Schools near the softball field. It reads, “Take what you need; leave what you can; but above all, be blessed.”

“If anyone would like to donate items such as shampoo, conditioner, toothpaste, toothbrushes, along with canned or boxed food, it would be greatly appreciated,” said Edwards.