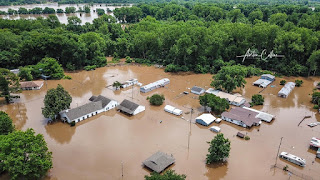 Our communities continue to be impacted by historic flood waters in Sequoyah County and surrounding areas.

Sequoyah County Emergency Management Director Steve Rutherford said the town of Moffett continues to be the hardest hit in the county.

Flood waters there drove residents from their homes during a mandatory evacuation last week, and the Arkansas River at Van Buren is not expected to crest until tomorrow or Thursday, Rutherford said, bringing river levels to over 42 feet, approximately 20 feet above flood stage.

The rising waters have put area rescue teams to work. Rutherford said the swift-water rescue team from McKey Fire Department has been assisting with rescues in the Fort Gibson area, bringing people out of their flooded homes to safety.

Oklahoma Highway Patrol troopers remain on scene here in eastern Oklahoma keeping an eye on flooded roads. Both lanes of Highway 64 from Roland into Arkansas are completely blocked. The OHP Emergency Response Team is on indefinite assignment in our part of the state. Officials are keeping a close eye on Highway 59 near the Kerr Dam. Rutherford said officials did not think it would have to close.

He did say 64D from Highway 64 to I-40 is closed in the Dora area, and a portion of Old 64 between Muldrow and Roland is closed; a lot of back roads throughout the county are also closed.

And the I-540 bridge and Midland Boulevard bridge from Van Buren into Fort Smith were reopened Tuesday after closing late Monday night.

Last night’s Fort Smith bridge closings routed traffic from I-40 to Highway 59 in Sallisaw south to Highway 9/271 and into Fort Smith on I-540 as one of the only ways into Fort Smith from Oklahoma. That additional traffic, though it prompted some delays, did not have a significant impact for Sallisaw or Sequoyah County.

“When the water goes down, I’m sure we’re gonna find some problems,” Rutherford explained.

Rutherford said if more rain falls in our area or to the north, those Fort Smith bridge statuses could change. For any road or highway closings in our area due to the flooding, visit okroads.org. In Arkansas, you can call or text (501)-569-2374 daily between 7:00 a.m. and 7:00 p.m. for help navigating around flooded highways.

Rutherford also reminds residents not to drive into flood waters as they move very swiftly with the current, and warns parents not to let their children play in the flood waters, as snakes, debris and other contaminants are in it.

“The water is not healthy to be in,” Rutherford explained. “Also, the current in it will knock them off their feet. It’s not like a swimming pool.”

If you are one of those affected by the flood waters, the Red Cross shelter at Roland High School is still open. Rutherford said they still have room for more and cots are available there. Volunteers are also assisting with feeding people.

Red Cross officials encourage individuals and families heading to shelters to bring clothing for a few days, bedding, toiletries, essential medications, and a child’s stuffed animal, blanket or other items for your children.

Sandbags are still available at the Sequoyah County Emergency Management office at 110 E. Creek Ave. And anyone wanting to donate clothing and toiletry item can drop those items off at the emergency management office from 8 to 11 a.m. Monday through Friday and those will be distributed to agencies assisting with flood relief.