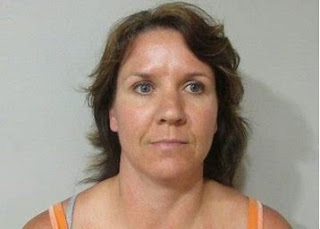 Angela Gray was once again in Sequoyah County District Court Monday regarding her court case.

Through a plea deal offered by the District 27 District Attorney’s office, Gray plead no contest last year to the conspiracy charge against her for her involvement in the Sept. 1, 2013 ATV crash near Muldrow which left Christian Mayberry, 16 at the time, with a traumatic brain injury. District Judge Jeff Payton gave Gray a five-year deferred sentence on Dec. 20, with a list of 17 rules and conditions of supervised probation.
In late December, Gray's attorney, Gary Buckles of Poteau, filed a motion to withdraw the plea, citing there were conditions Gray claims she was not aware of. Earlier this month, the DA's office filed a motion that the withdrawal be denied and that Gray had signed all the documents and had indicated that she understood the conditions of probation.

At Monday afternoon's hearing, Payton granted the DA's  motion to deny the withdrawal of the plea. He did agree to allow Gray's supervised probation to be through the Sequoyah County community sentencing program rather than the DA-supervised probation originally listed in her rules and conditions.

"I remember taking that plea and I remember going over all of those rules and conditions of probation with you," Payton said after Gray took the stand and was questioned by both Buckles and District 27 District Attorney Jack Thorp.

During questioning, Thorp kept showing Gray documents she had signed and confirming that it was her signature, which she did, but said she wasn't aware of what the documents were and didn't understand them. However, she was able to tell the court about other conditions of her plea agreement, including the 5-year deferred sentence, the charge of conspiracy and her no-contest plea.

"What do you not like about your probation?" Thorp asked Gray.

"Having to come up here at all; I don't want to have to come up here every month," Gray responded, referring to the DA-supervised probation. "This has gone on way too long."

She also had an issue with some of the court fees, including those charged for subpeonas.

Thorp said his office got what they wanted in their motion.

"She was claiming ... she didn't understand the DA-supervision aspect of it," Thorp explained after the hearing. "I had rather this case be supervised by community sentencing. I hope Ms. Gray lives her life according to the rules and conditions of probation.

"Hopefully, this will put an end to this case," Thorp added. "Unfortunately, there won't be an end for Christian."

Kim Mayberry, Christian's mother, said her family is glad to have this behind them.

"I'm grateful that it's over and that it went the way it needed to," Mayberry said. "Most of all, that Christian knows that this went the way it should -- that he has that assurance."

Gray has 90 days to appeal the decision with the Court of Appeals. Thorp said the original plea agreement also included dropping the conspiracy charges against Gray's son, Joey Gray, and Kyle Brannon, if the plea agreement stands.