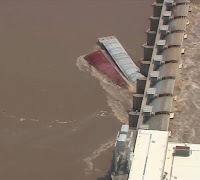 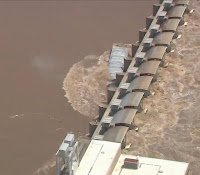 Photos Courtesy of News on 6

The two loose barges on the Arkansas River have made impact with the Webbers Falls Lock and Dam 16.

As the two barges hit gates of the dam at 11:55 a.m. Thursday, they could be seen breaking apart on video and are now being pushed against the dam gates by the force of the flood waters.

Sequoyah County Emergency Management Director Steve Rutherford said he had spoken with Sheriff Larry Lane, who was on the scene.

“The barges are pretty well destroyed,” Rutherford said, adding that Corps of Engineer personnel felt certain before impact that the dam would hold and that it was likely only a few gates might be damaged.

A spokesman for the Oklahoma Highway Patrol said although the barges have made their impact, they are submerged and pinned against the dam. The situation could still be precarious, as large pieces of the barges could still break through to float down the river.

As a precaution, the Oklahoma Department of Transportation and OHP will continue to have I-40 and U.S. 64 closed until more information is known to ensure traffic can travel safely.

For updated information about road and highway closings in our area, visit okroads.org.