Luttrell Named April Employee of the Month at NHS-Sequoyah 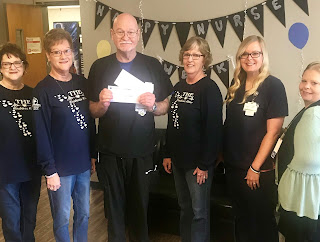 A respiratory therapist at NHS-Sequoyah has been named April’s Employee of the Month at the hospital.

Hospital Administrator Stephanie Six said Gearl Luttrell was honored as the April Employee of the Month for going above and beyond his job description.

“Gearl embodies what it means to be a leader, a team player and a role model of our NHS-Sequoyah core values,” Six said. “Gearl definitely cares for the well-being of others. Some patients even ask for him by name.”

A lifelong resident of Sequoyah County, Luttrell started working for the hospital in March 2013, and has 20 years of experience as a respiratory therapist.

“Gearl not only is very knowledgeable about respiratory therapy, but also can be seen taking out the trash, passing lunch trays or consoling the terminally ill,” Six said. “He always performs these duties with great dignity, compassion and a smile on his face.

“NHS-Sequoyah is blessed to have Gearl on our team,” Six added.

Luttrell and his wife of 36 years, Janet, have two children. He loves summertime, so naturally his favorite pastimes are spending time at the lake, boating and camping. He also enjoys making knives, shooting guns and spoiling his dogs.

The idea for recognizing an Employee of the Month came from the Kindess Krew, the hospital volunteer group known for encouraging and supporting the hospital employees. Luttrell was provided with a lunch for two from the Olde Feed Barn and free oil change from Blue Ribbon Auto, both of which were donated.