Sallisaw Woman Wins on The Price is Right 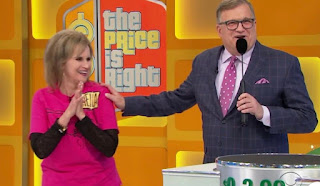 Sheila Cullum, left, with Drew Carey, host of The Price is Right.

A Sallisaw woman lived out one of her dreams recently as she heard those famous words “Come on down, you’re the next contestant on The Price is Right.”
Sheila Cullum of Sallisaw was featured in the March 28th episode of the popular game show after traveling to Los Angeles with her mother, sister and brother-in-law for the January 22 taping.

“I grew up loving Bob Barker,” Cullum said, adding that she used to tune in to see Barker’s beauties Holly and Janice also. “Who didn’t? The Price is Right was one of my favorite shows.”

So Cullum was “all in” when her sister, Shelly Miller, advised her in January they had finally received a response from the show application they had submitted one year ago to celebrate her sister’s birthday.

“We had four tickets to The Price is Right taping Jan. 22,” she explained. “Me, my mother, Ruth (Girten-Lowrimore), my sister Shelly (Miller) and her husband, Brian (Miller)flew out the 21st of January.”

Cullum said a lot of things happen for the 300 potential contestants before the actual taping begins. They spent hours filling out paperwork, taking pictures and interviewing with producers in groups of 25.

“We had been told that they look for enthusiasm; they want to see people excited and enthusiastic,” she added.

She said her group then had to give up their cell phones and smart watches and were ushered into a room with television monitors where various show games were playing. They were finally taken into the theater and shown their seats, which were toward the back of the audience. She said above their heads, a variety of vintage stage spotlights and cameras could be seen on the ceiling. A woman was holding a posterboard with the names of each new contestant on it, in the event two people have similar names or audience members cannot hear well over the cheering audience.

Cullum said when the live taping began, host Drew Carey was introduced and it appeared the show was over quickly.

“All of a sudden, they said, well, that’s our show, folks,” Cullum explained laughing, adding that they had to stop taping because Carey’s neck tie was crooked.

Cullum watched as the first four contestants made their way down to contestant’s row, made bids and got to play games.

She recalls hearing “George, who’s our next contestant?”

“I don’t remember hearing my name,” Cullum said. “But she flipped that poster over and there was my name! I thought, am I really seeing it?

“It was the weirdest thing – a surreal moment,” she added. “I was like, oh my goodness; my name is on that posterboard and I’m going to get to go down!”

Cullum made her way down the row and ran down the aisle to her spot on contestant’s row. She didn’t win the bid on some sunglasses and another prize, then had to wait for the first Showcase Showdown winner to be determined.

She made it on stage after winning the bid for a trip for two to San Diego.

“I was last, and by being last, I knew the girl next to me had bid $1,175, so I bid $1,176,” Cullum explained, adding that she didn’t realize it then, but the last three numbers in her bid, 176, was her late father’s badge number with the Oklahoma Highway Patrol. “When that number pops up throughout life, it's our little link to him.”

She made it on stage with Carey, who asked her where she was from. Cullum replied “Oklahoma – where the wind comes sweeping down the plains.” She then played the Time is Money game, but didn’t win the $20,000 prize.

“I had to correctly put grocery items in different monetary categories, from zero to $3, from $3 to $7 and $8 to $12, then hit the buzzer to see how many were correct,” she explained. “The time went extremely fast. I kept looking at Brian because he’s the price expert. I just ran out of time.”

She spun the big wheel twice – and had time to wish her daughter a Happy Birthday – in the second Showcase Showdown for a total of 50 cents, but missed out on the Final Showcase when the next contestant got a perfect $1 dollar, winning $1,000 and a bonus spin.

Contestants had to sign a privacy agreement, where they would not discuss details about the show until the air date. She is looking forward to her two-night, three-day stay in San Diego, which includes airfare, lodging and breakfast at the Manchester Grand Hyatt, valued at more than $2,600. She has one year to redeem her prize.

Cullum said she had a great time making memories with her family on a show she grew up watching. She would have never guessed in a million years that she would someday be a contestant on the show.

“I really wanted my sister to get on, but she said she thinks she would have had a panic attack,” Cullum said. “They couldn’t have been more excited.”

Since it was Cullum’s first trip to LA, the family toured the Hollywood Walk of Fame, Sunset Boulevard, the Getty Center, Beverly Hills, Bel Air, Malibu and the Hollywood sign.

They celebrated her sister’s birthday at the taping in January, and had a watch party last week while celebrating her daughter’s birthday.

She said she wrote down a quote by Downton Abby’s butler, Mr. Carson: “The business of life is the acquisition of memories.”

“That sums it up,” Cullum said. “I made some amazing, amazing memories. I’m very blessed.”