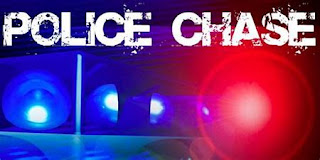 At approximately 7:15 am Wednesday morning Arkansas State Police contacted the Oklahoma Highway Patrol (OHP) advising that a subject had fled on foot from one of their officers and had stolen a vehicle out of Van Buren, Arkansas and was possibly headed into Oklahoma. The vehicle description was a blue Honda Element with damage to the rear.

The OHP notified Roland Police, Muldrow Police, and the Sequoyah County Sheriff’s Department. At 7:26 am Roland Police Department advised they had initiated a pursuit with the vehicle. During this pursuit, the fleeing suspect rammed the Roland police car hard enough to disable it and therefore delay apprehension. Officers lost sight of the vehicle around Muldrow.

According to an OHP statement, at approximately 7:32 am the vehicle was located in the city limits of Muldrow with no one around it. The subject was then reported by a resident in the area to have been running west on the north side of U.S. Highway 64. Trooper Sheldon Dobbs arrived on the scene and reported that he was assisting on foot to locate the subject. At 7:53 am Trooper Dobbs advised that the subject had been taken into custody by Roland PD without incident.

"This is a strong example of different law enforcement agencies working together for the safety of the public. The people of Sequoyah County should know that their officers, deputies, and troopers strive to protect them and their wellbeing," stated Trooper Adam Wood.

According to the OHP, the incident originated when an Arkansas State Trooper conducted a traffic stop. During a subsequent vehicle search, the subject fled on foot. He was later able to steal a vehicle and escaped to Oklahoma. During the search, it was discovered that charges of trafficking in illegal drugs would apply to the subject. "This appears to be a major contributing factor to this dangerous chain of events," added Wood.

The suspect was described as a black male from Tulsa, Oklahoma.