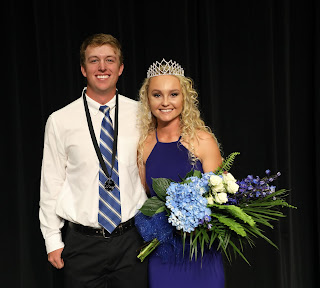 2019 CASC Homecoming King, Dylan Kuester, stands with Queen, Megan Green, after their coronation on Friday, April 12 in the Hamilton Auditorium.

The ceremony was held in the Hamilton Auditorium after the CASC Vikings challenged Redlands Community College at home on the Poteau campus.

Student clubs from both Poteau and Sallisaw campuses were represented in the ceremony through their club-voted student delegation.