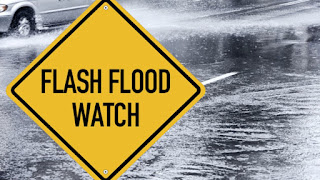 Emergency management officials want to remind area residents of safety precautions while the area is under a threat of flash flooding.

Emergency Management Director Steve Rutherford said meteorologists are reporting Sequoyah County could receive between 2 to 4 inches of rain over the next day, with the possibility of that number rising to 6 inches in some areas.

“It’s too early to tell for sure, but they expect some pretty good rain to fall in our area,” Rutherford said.

These rainfall amounts could lead to flash flooding, especially near low-lying areas and smaller creeks and streams. In addition, a few main stem rivers could also rise to minor or moderate flood levels, depending on which areas receive the heaviest rainfall, according to information from the National Weather Service.

A flash flood watch means rapidly rising water or flooding is possible within the watch area.

Rutherford said the best way to stay safe during flash flooding is to stay alert and avoid driving through flooded roads.

“Don’t drive through standing water,” Rutherford cautions. “If there’s water there, go around it. So many people think they can make it through.”

By driving through an unknown level of standing water and getting stranded, Rutherford reminds residents that a water rescue unnecessarily takes emergency personnel away from other more urgent calls.

“Rain will fall; if it falls as much as they think it will, we’ll have some high water,” Rutherford added. “Just be aware of it and don’t drive through it.”