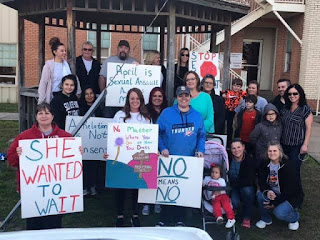 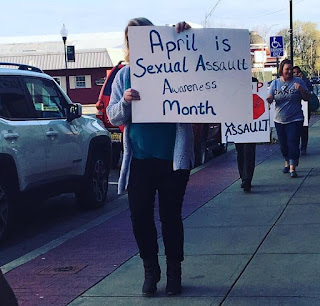 A gazebo lighting, followed by a short awareness walk around downtown Sallisaw helped bring awareness to sexual assault and that “no means no,” according to Cindy Smith, investigator with the Sequoyah County Sheriff’s office and CCR/SART coordinator.

“It’s hard for victims to talk about sexual assault,” Smith said. “They’ve been humiliated. There’s a degradation that happens in sexual assault.

“It’s very important for people to know that it happens – and it happens everywhere,” Smith added. “We’re not immune to it.”

Smith said after working more than 20 years in law enforcement, she has found that educating younger students has made a bigger impact.

“What we’ve been doing is going into the schools and talking to students, to educate people at the younger ages, instead of trying to deal with people after they’ve been assaulted,” Smith explained, adding that only half of actual sexual assaults are reported.

Smith will be making presentations during April, helping raise awareness of sexual assault, and also attending the Crimes Against Women conference in Dallas, Texas.

The Sequoyah County Commissioners declared the month of April as Sexual Assault Awareness Month throughout the county during their weekly meeting April 1.

Smith said more events are planned throughout the month, including Paint the Town Teal, in which you will see downtown businesses displaying teal ribbons in support of sexual assault awareness.

Sequoyah County CCR/SART will also host a public awareness event on the courthouse lawn from 11 a.m. to 1 p.m. April 27, the same day as the Sallisaw Main Street Hot Pickin’ Finger Lickin’ BBQ and Band Fest. Smith said several county organizations with resources for sexual assault victims will have information. They will also have free hot dogs, drinks and inflatables for the children. Kids can also see a police car and fire truck up close.

“Every resource will have a table doing giveaways,” Smith said.

She said they discovered last year that many Sequoyah County families are under served, with some not even realizing that there are resources available to victims of all crimes, including sexual assault.

“It’s so much better than 20 years ago,” she said of the strides taken in sexual assault awareness. “We’re making steps. We’re getting there.”

Anyone in immediate danger of being sexually assaulted should call 911; for other information, call 918-775-9155.