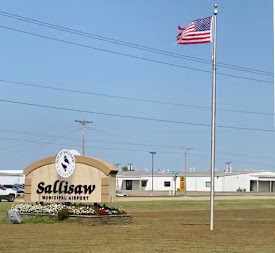 The City of Sallisaw has seen an increase in flights and other activity at the Sallisaw Municipal Airport in the last six months. The increased attention to the airport has been driven by a new Fixed Base Operator (FBO), as well as location and fuel prices.

“In January of this year we contracted with T3 Aerosports to be the new FBO for the airport. Owner Tom Hanning has really done an excellent job bringing activity to the airport as the new FBO. His training in aircraft maintenance and flight training, along with his networking with pilots, has proved to be a great asset for our airport. We have looked for ways to get the airport more activity through the years, and we believe we have found the right partnership to meet that goal,” said Keith Skelton, City Manager.

In addition to the new FBO, city staff has been working hard planning and implementing improvements for the airport. Recently a contract was awarded for the construction of a new 10,000-gallon Jet A fuel facility and rehabilitation of a runway drainage pipe. The $382,000 project cost is 100% funded by Federal Aviation Administration grant funding, as well as FAA CARES funding. “We are very pleased to put this grant funding to use at our airport,” said Skelton. “Having a project of this nature 100% funded by grants is a plus for the community.

Since 2010, the City has used over $1.7 million in FAA grants for airport improvements. A recent economic impact study of the Sallisaw Municipal Airport, performed by the Oklahoma Aeronautics Commission, showed a $3.6 million overall economic impact to the community. To continue building upon current activity, city staff is also working on increasing the number of aircraft hangars at the airport to meet a waiting list of pilots seeking rental space for hangars. Once the layout is ready, the new hangars may be built by the city, or privately built by aircraft owners.