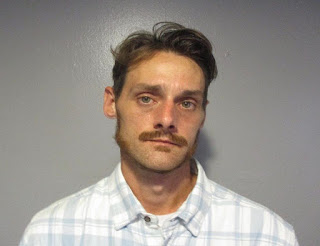 Kyle Wayne Caughman
An inmate at the Sequoyah County Jail was charged Aug. 27 with bringing contraband into a jail facility, according to court documents.

On Aug. 24, a Sequoyah County sheriff’s deputy was contacted by the jail administrator regarding contraband that was found on Caughman.

The jail administrator reported that a detention officer had seen Caughman drop a black, taped object. The detention officer questioned the man about what he had, but he said it was “just a piece of black tape. The officer confiscated the object, which was actually concealing four packages of Suboxone.