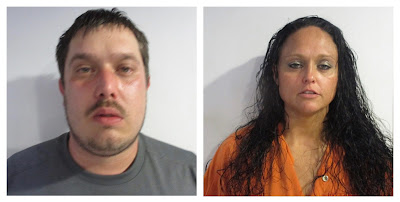 A Muldrow man and woman were arrested on Tuesday and charged with multiple felony charges thanks to an observant Sequoyah County Deputy.

Brandi Hammock, 41, and Michael Jeremiah, 32, were both arrested after being found to be driving a stolen vehicle and an in possession of illegal drugs and a loaded pistol, according to Sequoyah County Sheriff Larry Lane.
On Tuesday Deputy Galen Irvin was patrolling a rural county road south of Muldrow when he observed two occupants of a vehicle acting evasive and suspicious.

Irvin ran the vehicle's tag and learned that the tag had been reported stolen from Fort Smith. Irvin then turned around to attempt to make contact with the vehicle and witnessed the vehicle pull into a rural business and enter the building.

Irvin exited his vehicle, entered the building, located the two people and brought them back outside to speak with them about the stolen tag on their car. Irvin then learned that the vehicle had been reported stolen from Tulsa a few days earlier.

While placing the two under arrest for the stolen vehicle Irvin discovered a large amount of methamphetamine on Jeremiah. Irvin also discovered a loaded pistol, marijuana, and other controlled substances.

Upon running a criminal history of the two, Irvin found that both subjects were also convicted felons.

Jeremiah was charged with Felony Count 1 Trafficking in Illegal Drugs, Felony Count 2 Knowingly Receiving or Concealing Stolen Property, and Unlawful Possession of Drug Paraphernalia a Misdemeanor. He was released on a $30,000 bond.

Sheriff Larry Lane said “This was another great job by Deputy Irvin. He is always observant and vigilant while out on patrol. He knows his patrol area and the people in it and he quickly realized that something was not right with these people and followed up on his instincts."

Lane said that the total weight of the methamphetamine was over 326 grams.

"At today’s street prices, if sold by the ounce, this meth would have been worth about $9,000. If broken down and sold by the gram, it would be worth about $17,000," said Lane. “I’m proud of our deputies and investigators for continuing the relentless pursuit of drug dealers and thieves throughout our county."