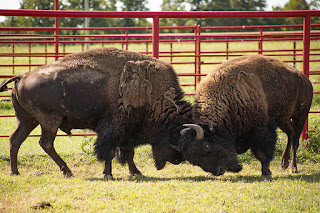 The Cherokee Nation welcomed two new bison bulls to its herd in Delaware County. The two bison originated from Yellowstone National Park in Wyoming and were transferred to the Cherokee Nation’s bison ranch as part of a preservation effort to reconnect tribes with the historically significant animals through the InterTribal Buffalo Council. 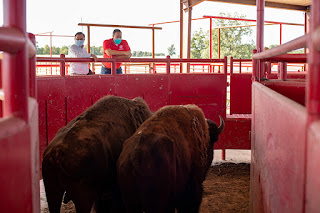 The Cherokee Nation recently welcomed two bison bulls from Yellowstone to its herd in Delaware County.

The InterTribal Buffalo Council awarded the Cherokee Nation the surplus bison in July. The new additions traveled over 1,000 miles from Yellowstone National Park in Wyoming to the tribe’s bison ranch in northeast Oklahoma, where they arrived this week.

“This partnership with the InterTribal Buffalo Council continues to benefit the Cherokee Nation by allowing the tribe to grow a healthy bison population over the last five years,” Principal Chief Chuck Hoskin Jr. said. “Historically, bison provided an essential food source for tribes. Every part of the bison was used for food, clothing, shelter, tools and ceremonial purposes. These newly acquired bison will help revive some ancient cultural traditions, as well as provide expanded economic opportunities for future generations of Cherokees.”

The InterTribal Buffalo Council, headquartered in Rapid City, S.D., awards its member tribes surplus bison from national parks each year. This year, the Cherokee Nation is one of 16 tribes across the country to receive bison from Yellowstone National Park.

The bison from Yellowstone are genetically significant, because they are remnants of the buffalo that once roamed free more than 100 years ago. These bison are expected to help boost the long-term health of buffalo herds across tribal lands because of their unique genetics and lineage.

“It’s a great day to welcome these two young buffalo bulls to our bison herd. Yellowstone buffalo are significant to tribes because they descend from the buffalo that our ancient ancestors actually lived among and this is just one more way we can keep our culture and heritage and history alive,” Deputy Chief Bryan Warner said. “By adding these new bulls, we can create diversity within the herd so we can grow it and look at a long-term plan as well as preservation efforts for years to come.”

Although bison are associated more with the Great Plains tribes, woodland bison once roamed the Cherokee Nation and all along the Atlantic Coast. Before European colonization, the animals played a critical role for the Cherokee people. When the buffalo migrated east of the Mississippi River, the Cherokee people survived, in part, by hunting buffalo and using them as a vital food source. However, after European colonization, bison were mostly wiped out from the east and southeast parts of present-day United States.

Until 2014, the Cherokee Nation had not raised bison on the reservation in 40 years. The tribe spent about two years working with the InterTribal Buffalo Council on grants and applications to reconnect the animals.

“I was incredibly honored when Chief Hoskin appointed me to the InterTribal Buffalo Council to help work on expanding our bison herd. This is an effort I have been passionate about since I was elected to serve on the Tribal Council,” said District 5 Tribal Councilor E.O. Smith. “Seeing the two new buffalo being released into their new home makes me grateful to be a part of the preservation of bison on Cherokee land.”

The Cherokee Nation Natural Resources department manages 22,000 acres of tribally owned land in northeast Oklahoma, with the tribe’s bison ranch being housed on approximately 1,000 acres near the Kenwood community in Delaware County.

Today, the tribe’s herd is made up of approximately 180 bison.