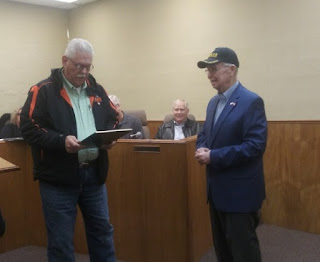 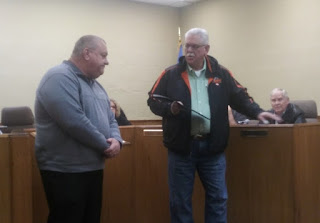 City Manager Keith Skelton, left, was honored for 25 years of service to the city of Sallisaw. Presenting the award was Mayor Ernie Martens.

Sallisaw’s city commissioners honored two men for their outstanding service to the community at their monthly meeting Monday.

Mayor Ernie Martens presented Buddy Spencer, chairman of the Sallisaw Improvement Corporation, with a proclamation describing his and the agency’s distinguished role in the community. Martens said Spencer and the group have worked tirelessly to promote Sallisaw.

The mayor also honored City Manager Keith Skelton for his 25 years working for the city.

Martens said though Skelton has only been city manager for a relatively short time, his hard work has brought great things to the City of Sallisaw.

In other business, the city council approved a new administrative policy regarding the city’s social media use. The city is working to expand its use of social media to reach out to more and more residents, Skelton said.

The council also approved an engineering agreement with Garver Engineering for design and bidding services related to the airport’s fuel farm and runway culvert replacement, in the amount of $42,950.