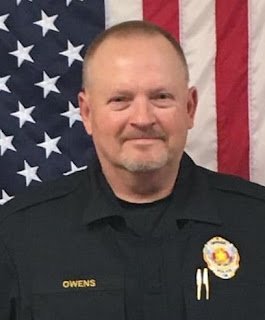 “All my time has been at the Sallisaw Police Department,” he said Tuesday. He spent two years as a reserve officer and 25 years as a full-time officer.

Owens said that nine grandchildren -- and one on the way! -- as well as his role as a board member of the Sallisaw NOW Coalition will be keeping him busy long after his career ends.

Looking back on his time with the SPD, Owens noted, "The department has a great bunch of people. It makes your job a lot easier when you have a good team.”

Sallisaw Police Chief Terry Franklin said working with Owens has been “great” and that he was hoping to talk him out of retiring. “He has been a great employee and friend,” he said.

Owens said that in his spare time, he plans on doing lots of fishing and on completing “honey-do” tasks for his wife, Donna.