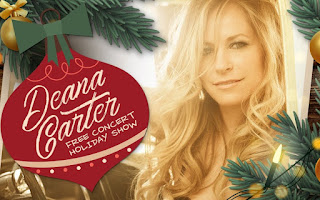 Deana Carter took the industry and country music fans by storm with her wildly successful, multiplatinum, international-debut “Did I Shave My Legs for This?” more than a decade ago. On Dec. 14, she brings her hit songs, alongside classic Christmas favorites, to Lee Creek Tavern inside Cherokee Casino & Hotel Roland for an unprecedented holiday performance.

Carter’s chart-topping debut album, anchored by the dreamy No. 1 super hit “Strawberry Wine,” showcased her own blend of country and retro-rock sprinkled with folksy singer-songwriter qualities.

Her debut album boasts six songs co-written and co-produced by Carter and was released to strong reviews in late summer 1996. By the end of the year, the record had climbed to the top of both the country and pop charts, quickly achieving RIAA multiplatinum status. A first for the genre, Carter’s celebrated debut held this distinction for more than five years. Along with the album title track and “Strawberry Wine,” the record features “We Danced Anyway” and “How Do I Get There,” both climbing to the coveted No. 1 position.

Her record “Everything’s Gonna Be Alright” followed in late 1998. Making a strong move towards adult pop, Carter released “I’m Just a Girl” on Arista Records in 2003, the same year Capitol Records released a greatest hits compilation. The follow-ups, 2005’s “The Story of My Life” and 2007’s “The Chain,” were both released on Vanguard Records.

In an effort to pay homage to her musical roots and preserve her legendary father’s label, Nugget Records, which famously presented some of the best in country music some 40 years ago, Carter opened her own label, Little Nugget Records, on which her latest album, “Southern Way of Life,” was released.

Cherokee Casino & Hotel Roland is located off Highway 64 on Cherokee Boulevard in Roland.